Two cards and a tutorial

STICKY : If you're looking for blog candy just leave a comment on this post! If this is your first time here, I hope you'll take a look at some of my older posts and maybe decide to subscribe!

The other day I was at work with absolutely nothing to do. I didn't bring any stamped images with me to color which I sometimes do for days like that, but I did have a bunch of embroidery thread there from the days when I used to do a lot of cross stitching. I decided to do a little paper embroidery just to pass the time. I found some free patterns at Stitching Cards and printed out one with some pretty flowers. About 20 minutes later I had a card stitched and ready to put on a card when I got home later. 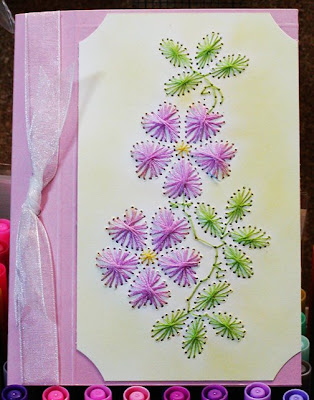 Once I got home I chalked around the flowers, clipped the corners and mounted it on a card that I tied a ribbon around. I thought someof you might like a tutorial on how to do this. It's very simple, but makes a card look like something special. Now before I get started on the tutorial let me just say that once I started taking pictures of the tutorial I thought "This is silly! Who needs to see pictures of me doing this step?", but I had already started with the pictures and now they're all uploaded to my pc, so I'm going ahead with it no matter how silly it may be.
For the tutorial I went back to Stitching Cards and picked out a pattern. I chose a holly wreath, and printed it out. Gather your pattern, a piece of cardstock big enough to accomodate the pattern, a piercer, a mousepad, and some tape. 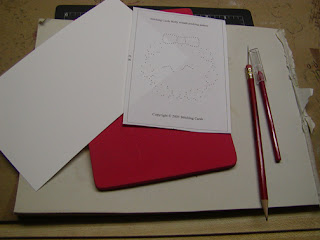 In this photo you can see my home made piercer that I made with a needle stuck in the eraser end of a pencil.
The next step is to tape the pattern to the card where you want it to be. You can use repositional tape if you have it, but I just use plain old scotch tape and I stick it to my jeans once so it's not as tacky and that way it won't tear my cardstock when I remove it. Here my pattern is taped to the cardstock and I'm ready to poke my holes. Lay your cardstock with the pattern taped to it on top of a mouse pad and simply poke holes where there are black dots on your pattern. 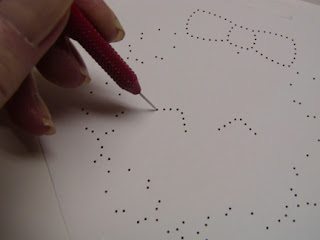 When you have finished that, carefully remove the pattern from the card and your cardstock should now look like this: 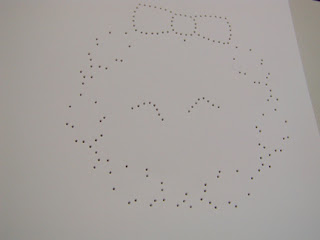 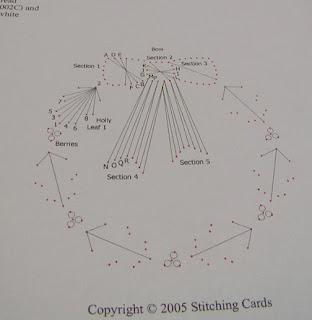 I began with the gold bow. I chose a gold thread and brought my needle from the back of the card to the front in the hole the pattern tells me to. Tape the end of your thread to the back of your card with a small piece of tape. 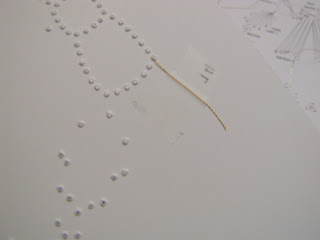 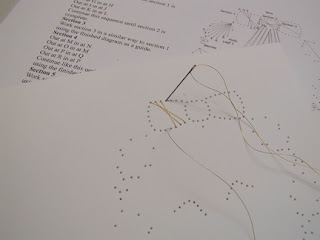 Once I finished the bow I was ready to move on to the holly leaves. For the leaves I chose three colors of green and used one strand from each. 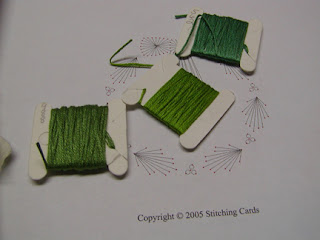 Work the leaves in the same way you worked the bow. If you run out of thread, just tape it to the back and get some more thread. The only thing I had to watch for on this pattern was not to tape my threads in the center of the wreath because I didn't want them to show through the white cardstock. I taped my ends directly to the stitched areas. Here's my wreath progressing. 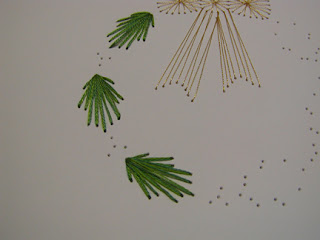 Now the pattern called for using red beads for the berries, but I didn't have any beads on hand, so I chose to do red french knots. Here is a close up of my french knots. 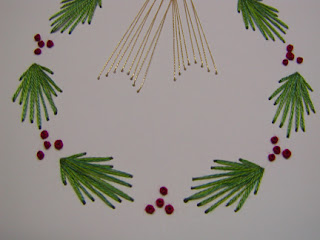 Now my wreath is finished so all that's left to do is cut it the size I want and layer it with other cardstock or paper and make a card! Here's my finished card. 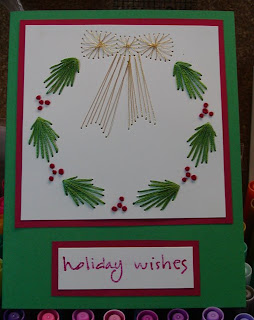 I hope you enjoyed today's cards and that maybe you found the tutorial helpful. There are a lot of fun and free patterns out there, so give it a try sometime for something a little different!
Thanks for looking!
Posted by Holly Young at 6:00 AM

What a great tutorial, Holly! I used to cross-stitch a long time ago but haven't done it in a while.

Thanks for sharing with us and giving us some new ideas :~)

Ok, where do you work? lol! I need a job like that! I love to do stitching like this (on fabric). Never thought to do it on a card!

WOW! These are absolutely amazing!!

Lovely card! This is just to smart. You did a great job on both cards. Thanks for the tutorial.

Thanks for visiting my page Holly. I really extra luv your stitching cards.
Have a nice weekend.
hugs,
Jackielou

This is amazon!! I found your blog googling, looking for a tutorial I want to add more stitching to my cards. Excellent work thanks for the tutorial.

Holly, both of these cards are fabulous!!!