A friend of mine was telling me that she thought she was going to have to order the Stampin Up stamp set Snow Swirled. This is the stamp set she's talking about

The thing is she has another stamp set that is similar so she really didn't want to buy another one that was almost like the one she had, but she really liked that other tree. I told her to improvise with the stamps she had. She told me to do it. So I did!
The first thing I did was create a template. 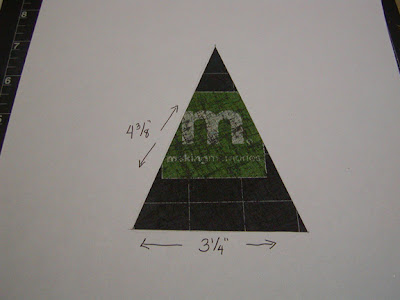 Then I positioned the template over the cardstock I wanted the tree to be on, and I gathered some of my flourish stamps to use. These are from Autumn Leaves. 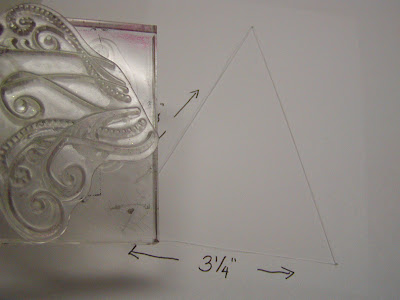 Then I stamped in two different colors of green in a random pattern all over. Then I picked a little flower burst stamp to use, but small snowflakes would work well too. 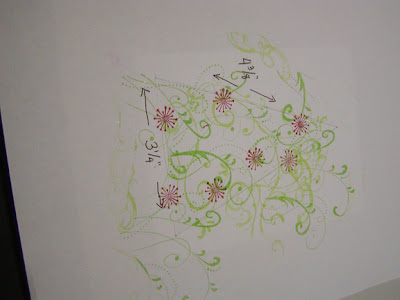 Take off the template and reveal your own one-of-a-kind snow swirled tree! 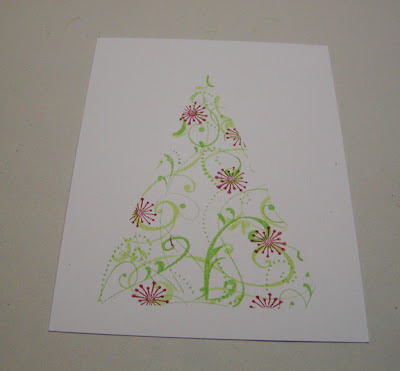 And here's the cards I made. My kitty was keeping company while I made these. :) 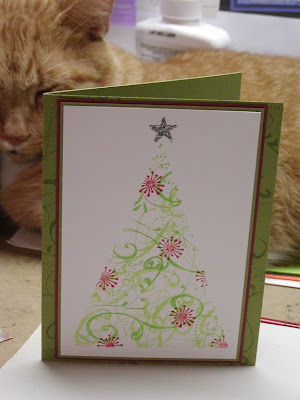 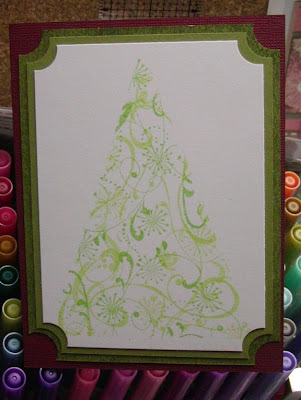 I thought the first tree was a little big, so I made another template that would allow me to use a regular A2 size card and still have room for embellishments to show. The measurements for this one are 3" across the bottom and 4 1/8" for the sides. 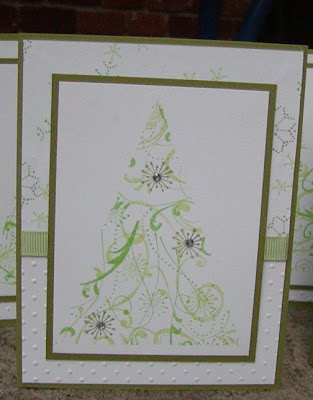 I added some little rhinestones in the center of some of the flowerbursts. I ended up liking this card so much that I joined a Christmas card swap on one of my rubberstamping lists and made five of them!
So, what do you think? Did I convince her to improvise? Did I convince you? Thanks for looking!
Posted by Holly Young at 6:00 AM

That is absolutely beautiful!! you are sooo creative!! : ) TFS

You sure convinced me! I love that set and did not buy it but should. I have a nice flourish stamp that I think will work for this so will try it later on. Thanks for sharing!

Great idea...I like the corners of the layers on the all green tree the best but overall I think I like the third card the most.

You really are getting us to think aren't you! LOL

Whoa! What an amazing idea. I already have that flourish set you used to, I can definitely see this becoming my Christmas Card this year. Truly inspiring!

You boggle my mind with your awesome creativity, Holly!
Uh - my fave (photo) is the one with your kitty keeping your company.
purrrrrrr.........

Fabulous and inspiring improvisation! Love all your cards Holly...beautifully done!

WoW! Thanks for sharing how you did your tree. Your tree is so beautiful.

WoW! Thanks for sharing how you did your tree. Your tree is so beautiful.

well aren't you so very clever. I think your idea is great! I have the aforementioned stamp set and love it! I, however, bought it when it was on sale at 20% off. I have a similar set and don't think that I would have bought it if it had not been on sale. LOVE your idea and the card is gorgeous. The bling is just the right touch!

How creative! Those are great flourished trees!

I love this tutorial. Thank you so much. I have the stamp set from S/U that you show, but it isn't big enough for what I want to do on another project. Love the idea of doing this.
Thank you so much for the inspiration.

I hope you convinced her because you sure convinced me. I wouldn't have thought of this. It was one of those "I think I need just one more stamp for Christmas". Thanks for saving me $$.

love how you improvised! I especially like the one with the rhinestones. Well done; fabulous cards.

That is a terrific idea. Thank you

great job on copying the image! But I have the stamp set of course and love it!

That is so neat, never thought about doing that! Very creative!!
http://laumanpaperworld.blogspot.com/

This is such an imaginative use of swirl stamps. I also loved that Christmas set but decided I couldn't afford it. Now I can have it your way! Thanks so much for the inspiration.

Well aren't you clever? lol. I would seriously never think of something like that. Now I have to try it. :)

I'm catching up on my blog reading so this is a little late, but I just had to comment that you are just TOO clever!!! What an awesome idea and your cards are just gorgeous!!