Happy hump day everyone! Today is even a happier day for one of my commenters because I never heard from my blog hop candy winner Luverlie so I had to have random.org pick another number. This time it's #15 so that makes Lisa the winner of my blog hop candy! Lisa, your comment does take me to your profile page where there is an e mail address for you so I'll be contacting you for your address.
Folks, please take note - if you don't have a profile that lets me see an e mail address for you, leave it in your comment. Otherwise I have no way to contact you to let you know you've won a prize and posting it on my blog hoping you'll see it and contact me is the only way I know to do it.

I still have the one surprise I was giving to my 100th follower who hasn't responded to me either, so I've set it aside and will surprise someone else with it sometime soon, but you never know when! I know, I get my kicks rather easily don't I?

Yesterday I asked if anyone knew what the Longhorns symbol had to do with rock and roll. Well my cousin looked it up on Wikepedia and found some interesting stuff! here's an exerpt I'll share with those of you who were as clueless as me.

The horns became famous in metal concerts very soon after Black Sabbath's first tour with Dio.
From an interview with Ronnie James Dio on Metal-Rules.com:
Metal-Rules.com – "I want to ask you about something people have asked you about before but will no doubt continue to talk about, and that is the sign created by raising your index and little finger. Some call it the "devils hand" or the "evil eye." I would like to know if you were the first one to introduce this to the metal world and what this symbol represents to you?"
R.J. Dio – "I doubt very much if I would be the first one who ever did that. That's like saying I invented the wheel, I'm sure someone did that at some other point. I think you'd have to say that I made it fashionable. I used it so much and all the time and it had become my trademark until the Britney Spears audience decided to do it as well. So it kind of lost its meaning with that. But it was…I was in Sabbath at the time. It was symbol that I thought was reflective of what that band was supposed to be all about. It's NOT the devil's sign like we're here with the devil. It's a n Italian thing I got from my Grandmother called the "Malocchio". It's to ward off the Evil Eye or to give the Evil Eye, depending on which way you do it. It's just a symbol but it had magical incantations and attitudes to it and I felt it worked very well with Sabbath. So I became very noted for it and then everybody else started to pick up on it and away it went. But I would never say I take credit for being the first to do it. I say because I did it so much that it became the symbol of rock and roll of some kind."


Well today I have a fun card to show you! I used the Beach Baby image from Squigglefly and made this 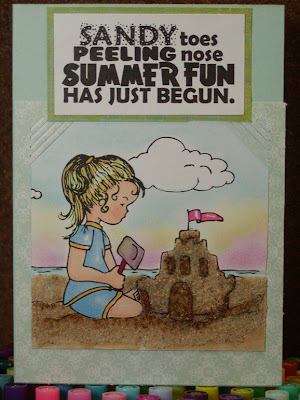 I colored it with copic markers but since I colored part of it at work and part of it at home I wasn't able to get a picture of the markers I used. I chalked the sky and then rubbed glue all over the sand areas and sprinkled on some real sand. After it dried, I applied more glue to the castle and sprinkled on some more sand so it would look built up like a real sand castle.

I had to use a black pen to make some of the lines darker and I used a brown copic marker to shade the sand in areas. I think it turned out cool though, don't you?
Here's a close up of the sand 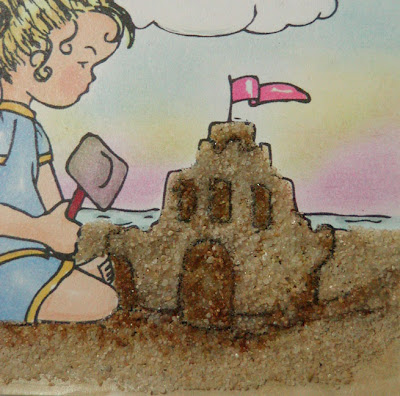 The cute rhyme at the top is some freebie word art I got at a blog I found called
Lazy Daisy Designs. she has a lot of really neat and different ones she has made. If you want any of them though, you need to hurry over there because she posted yesterday that she's going to be pulling them down soon and will start selling them.

Several people have asked me how my sister is doing since her hip replacement, and she's doing great! She is getting around better and better every day and she is really thankful to have that hip pain gone. Thanks to everyone for their prayers and well wishes.

I've decided to get the yahoo squigglefly group more active by taking a more active roll in it myself and I'm now the owner of it! So, I'd love to have you all come join me there. We have a lot of fun talking about the new images, what images we'd like to see, and helping each other out with tips and suggestions.

Whatever is on your agenda today, I hope you enjoy it and thanks for spending a little time with me here!
Posted by Holly Young at 3:22 AM

This is adorable, I love how you did the sand castle, it looks so real.

this card is awesome love the sand
Hugs
Norine

So very creative!!! I love the real sand idea! You are always thinking outta the 'sandbox'!!!
Bwahahahahahahaha!!!!

Thanks for the info on the sign. I adore your card. It's very nice. Clever idea with the sand!

Oh Holly-- this card is so kewl! I love it! Never would've thought of real sand!

What a FUN card! :) Using the sand is so YOU, and I LOVE the chalking in the background! BEAUTIFUL! Also love how you did the top corners on the image panel...COOL!

Thanks for the link to Lazy Daisy Designs...boy does she have some AWESOME downloads! I can understand why she is going to start selling them! :)

Stay cool everyone...gonna be a HOT one today! :)

Let me just say first that sand on the castle is ADORABLE! I just LOVE what you're doing with my wordarts! Thanks SO much for downloading and letting me see your awesome final products! :)

One of the best things about coming to your blog is that I always learn something! I adore the idea of real sand on the card...it's so clever I wish I'd have thought of it first!!!!
Your colouring is just gorgeous too! It's just a fantastic card ♥

OMGoodness!
This is so very, very beautiful!
What a wonderful idea with the sand!

So THAT'S why my 4 year old grandson flashes me that sign!! I'm ALWAYS giving him the "Evil Eye"...it never works though LOL

You are amazing Holly...real sand on your card? Just Fantastic :~)

So glad your sister is doing well..have been thinking about her lately :~)

she is way too cute and your coloring is fabulous. you are just so full of wisdom (notice i didn't say "stuff") LOL.

Holy cow!! You go girl!! This is really fabulous!! I love that you've taken the REAL nature and brought it into your crafting projects!! AWESOME!! I love the sweet sentiment you've used as well!! :)

BTW...thanks so much for your support and kind words!! So much appreciated!! HUGS

OMG! Used to listen to Dio with my ex. Pretty much dates me huh. I'm guessing you received some inquiries regarding the horns. Finally bought her today. Can't wait to play with her. And this card is brilliant.