Hi everyone! Man, the leaf season is upon us! Brock and I have been out in the yard that last four afternoons raking leaves on to tarps and dragging the tarps to the street for the leaf vacuum. Such backbreaking work, but dragging them down to the street is much easier than bagging them all! I really don't know why we do it anyway. I tell him when we go to the park with Riley "Look at all of these trees and all the leaves they drop out here. The park doesn't rake these up. They just sit here and rot, and come spring are we still knee deep in leaves? No! We have grass come up just like always." But he still wants the leaves out of here. I know it does make the yards look nicer, but I'm not convinced it's worth it!

It's hard to believe that Thanksgiving will be here two weeks from today! With that in mind I wanted to create another Thanksgiving card and I thought this was a quick and easy one to make. 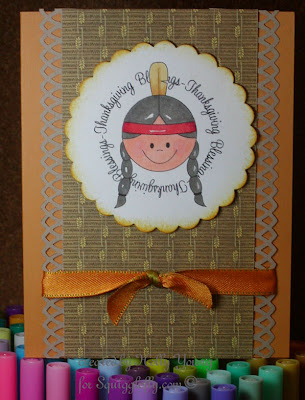 I used one of the adorable Thanksgiving circle images that Robin Willis has drawn for Squigglefly. This one is called Indian Girl. She's colored with copic markers and the scalloped circle is sponged on the edges.

the designer paper is from Debbie Mumm and I used a Martha Stewart border punch on some kraft card stock on the sides. I think a little note card set made with all of Robin's Thanksgiving circles would be cute.

I gotta tell you something funny. You know I'm fur baby sitting for Chesney's pets this week while they're on vacation. Well she had left me instructions on how much to feed her four cats and she told me where each cat's food dish was. She said Max eats in the bedroom away from the others because he will eat their food, Bourbon's dish is by the sink, Georgie's dish is by the refrigerator, and Penny's dish is by the stove. So, I'm there trying to keep all the cats straight in my mind and they are all following me around in one big group. I get the bag of food out and turn around and see all the cats patiently sitting in front of their respective dishes waiting for the food to appear! Max was in the bedroom poking his head around the door to see if I was coming! It was just so funny when it happened.

Well, I hope you have a fantastic day ahead of you and thanks for looking!
Posted by Holly Young at 4:13 AM

Your card is so sweet. I like your borders. I never think to use what punches that I do have. That background paper is fantastic.

What a cute lil card this is! Thanks for leaving me some "love" over at SCS!

That's hilarious about the fur babies! Poor Max! :( Gosh, I have a hard enough time keeping my 1 satisfied!

Such a GREAT Thanksgiving card... PRECIOUS image! I LOVE all the circle images...there's sooo much you can do with them! :) The DP is FABULOUS and I love the punched border! Fabulous job, Holly! :)

Holly your card is adorable...love it. Animals are such creatures of habit aren't they? And I know what you mean about those leaves! We busted our tails last weekend getting our leaves all picked up and up came a big wind on Tuesday and blew ALL of the leaves from the neighbor's house down the street into OUR yard! Oh boy...that was so disheartening!

like kids waiting for the candy bowl to be filled! LOL.

such a pretty card! i just love all those circle images. this is really super.

and doesn't brock know that the leaves act like a blanket to the grass? which is why the grass looks great when it starts to come up in the spring??????? and do you ever really see weeds iin a park or forest???????
sheeesh! men! LOL

That is too funny about the cats!

I love your card! I downloaded a few of the winter circles last night, think they will be fun!

I really like how you used the border punch, the dp is fab with that card!

LOL..just think about how well trained your grandkids are going to be ;)

It seems to me that your hubby is the one wanting the leaves raked...I say, let him do it if he wants to...some things are just better left for the men....

This little indian girl is just the cutest thing!! I can't believe tha Thanksgiving is just around the corner...and what about Christmas??!!??

Love this card - you do such an amazing job with these images.
Cute furbaby-sitting story.

so ADORABLE! love it!

Hahaha, cats are so funny. Now that I have two I can relate to your experience. I always feed Emily first though, because she is the oldest and has a special diet from the vet, Oscar is our new baby and has the cheep stuff from the supermarket. When I'm not looking they swap bowls, I suppose Emily likes here takaway now after having a la carte all her life. LOL

I really like these circles!!! They give the card just the right touch!

Cute card! and I hear ya about the leaves. I HATE doing that! especially pine needles...UGH...That's too funny too about the cats and Max watching you...LOL I have an award for you HERE

fun card - admiring your pen collection there too!

Those cats sound very entertaining and I love their names - maybe they'll have washed tehir bowls for you tomorrow!

What a cute cat story! Here you were worried and they knew just what to do!

Very cute card. I love how the border punch adds to the texture f the card.

I just love your Indian Girl card. It has such a lovely fresh feel and is so clever. I really admire this card. Thanks for visiting my blog and leaving your kind comments. I very much like your work too!
Here are early happy Thanksgiving wishes for you.
Mayjasper

Chesney's fur babies sound adorable!!!! I so wish we had cats again! :(

fun card Holly, I like the border in kraft!!!

Very nice Holly, what a sweet image, colored in perfectly! Love the border you used here and that yummy ribbon!

AWW!! This is just adorable!! I love these sweet circle sentiments with the images...clever idea!! And fur baby sitting can be fun but exhausting!! I remember doing that not too long ago with Oscar and Mocca together...especially a puppy!! WHEW!!