Featured Stamper card and a Fun Craft To Do With Kids!

Hi everyone! How do Monday's come around so fast? Four days off flew by! I did have time to play in the featured stamper challenge on Splitcoast stampers yesterday. The card I chose to CASE is THIS ONE, and here is my card 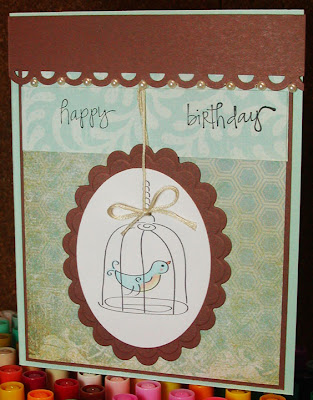 I loved the way Kris had the little bow tied around the top of the bird cage, so I was sure to copy that little gem of an idea! My caged bird is from Squigglefly of course, and is drawn by Revi Devi Paat. I colored the bird with Copic markers, but that's the only coloring that was required!

The happy birthday sentiment is from a dollar stamp I got at Michaels. The pearls at the top really dress this up don't you think?

Now, how about a fun thing you can do with your kids or grandkids? A while back I saw on one of Squigglefly's design team members blogs where she was making turkey's with her daughter by tracing their hands. I mentioned to her a craft I used to do with my kids when they were younger where we used their hands and feet to make a reindeer. I told her how to do it, and then I thought maybe it would be a fun thing to show ya'll too!

I don't have any grandkids (yet!) to do this with, so I did the next best thing and asked my best friend if she would trace her granddaughter's hands and feet for me so I could make one. here's how Katelyn's reindeer looks 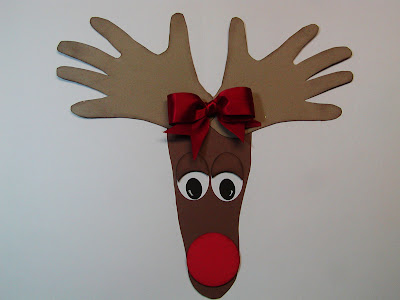 I made my eyes with two white ovals, and two smaller black ovals. The eyelids were punched out of two brown ovals and I used a circle punch to take a bite out of each one. I sponged some Chocolate Chip ink on that too and used pop dots to pop them out over the eyes a bit. I used a white gel pen on the black part of the eye. The nose was also popped up and sponged a bit on the edges to give it a bit more dimension.
I added a bow so Katelyn can have a girl reindeer!

Make sure you write the child's name and date on the back. You can add a paper clip to the back for hanging, or a magnet for hanging on the fridge. I've also seen popsicle sticks taped to the back so they can be used as puppets. I think it would be cute to trace the hands and foot, scan them and then reduce the size on your computer and make tiny little reindeer for putting on a tree or pinning on a coat lapel.

Today's Monday so that means there's a new challenge on the Squigglefly blog today! Run and see what Kim has challenged the team to do! Enjoy your day, and thanks for looking!
Posted by Holly Young at 5:33 AM

What a great idea you have here. I will be doing this with my 2 grandkids! They will love this!!! Thanks!

Love your clever idea for this card Holly!! Great use of props!! :) What a darling reindeer project!! So fun...boy how I wish my kiddies would do this stuff again!! LOL!!

What a cute card but I think that awesome reindeer of yours is the star of the show this morning. :)

That is so cute Holly... I will have to try that with Emma. I get her tomorrow. She will love to do it. Your card is really cute also.

Thanks for sharing your lovely card and a great project for the kids!

Adorable card...and I remember my younger daughter bringing home one of those reindeer creations. Now I think to myself - why didn't I think of that?!!

your handy reindeer is so 'deer'! lol I miss doing little crafts with the kids!
HUGS!

Yes! Now I get it. This would be perfect to replace the turkey on the door. These really are great to look back on. I just measured her baby foot with her 3 year old foot. My how they grow and you don't even realize. The bow is the perfect touch.

Also, great card as usual. What a lovely image.