What Have I Missed?

Hi everyone! I'm just popping in to share a cute card I made and if you're interested in the going ons with our dog Riley, then you can read about that after the cards! I saw a card at the store the other day, and I thought it was funny enough to make one of my own. I used the Looth Tooth image by Lynne Stansbery. 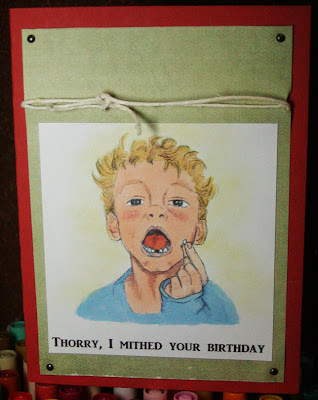 I colored with Copic markers and used chalk around the background and added the text with my computer at the same time I printed the image. When I was coloring this I was thinking this would make a cute "All I Want For Christmas" card too!

Now the funny part is on the inside 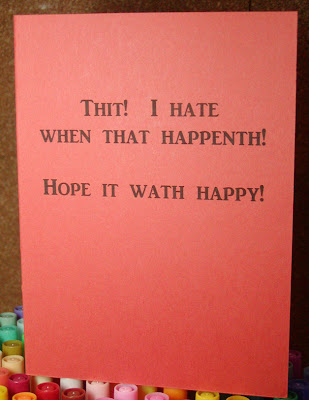 Since my last blog post we have had quite a Riley-ventful time!

It started out on Friday afternoon. We took her out to a friend's farm to run around on. He has gotten a new dog since we were there last so we weren't sure how that was going to go because sometimes Riley can't be nice to other dogs. Luckily this dog knew to back off when Riley warned her, but she didn't take it too seriously and came back time and time again to finally make friends with Riley. They ended up running around the whole place smelling every little thing and splashing in the pond. It was fun seeing them get along and run together.

Now this friend has pigs on the farm - big pigs that are in a pen. One of the pigs had a litter of piglets, so there were about ten little piglets in there. Really cute! What we didn't know was that they could wriggle out from under the pen and get out. Two of the piglets got out and were just walking around smelling things. Riley of course was very curious and followed them around smelling them, but being nice. Then one of the piglets got a little nervous and took off running. This made Riley chase, which in turn made the other dog run after Riley. The little pig runs around the pen and slides back under for safety, but Riley slid in too, and then so did the other dog! The other dog had been in there with the pigs before and was fine, but that dog is not Riley, the dog who is hell bent on doing things her way! I was scared to death the mama pig was going to show Riley who was boss! I wish I had had a camera going because one big pig got in front of Riley and she had a look on her face that was a little intimidated (which we never see) but saying "hey, I've got no beef with you - it's that little squirt I want!" Anyway, she kept chasing the little piglet and I'm yelling for Brock to get in the pen and get her out before something bad happens and the friend who owns the farm looks at me and says "the mama pig will make a believer out of her" and I said "that's what I'm afraid of!" He doesn't think of animals the same way I do. Anyway, Brock did climb into the pen and get her out before anything bad happened.

Then on Saturday we took her to the park for a little walk. We walked along the edge of the water by the river, and then on the way back we went up on higher ground to give her new ground to smell. Suddenly she jumps down the bank and the next thing I know she's got a skunk in her mouth shaking it in that terrier way. I start to pull on her leash telling her to stop but of course she doesn't. Brock jumps down the bank trying to avoid the skunk, but trying to get Riley to let go. Riley flips the skunk up and it lands a little away from her giving the skunk time to raise his tail, aim, and fire! She gets a load of skunk spray right in the face. Does that stop her? NO!
She is ready to go back for more and I'm still pulling on her leash trying to get her back up the bank, and Brock is trying to run back up the bank away from the skunk. I saw the skunk raise his tail and rotate is butt to take another shot and I gave the leash another tug and got her back up the bank. Then we had to walk back to the truck where we luckily had the forethought to pack a skunk spray emergency kit (learned that after Jacy got sprayed there a few years ago). I think Riley hated the de-skunking more than the skunking! We took Monday off!

Last night we went into the woods and hunted around. Riley found a geochache stuffed in the trunk of a tree. We pulled it out and left our names in the book. The latest entry was Thanksgiving day of this year. Then Riley found a log that she kept scratching at insisting that something was in it. Brock and I shook it and kicked it trying to scare anything out, but nothing. Riley kept insisting, so we gave it another try and a mouse ran out! She chased and we had to move the log a few more times for her to continue the chase, but she finally won and caught the mouse!

On our way back to the truck she saw a raccoon, and he ran up a tree but only part way. He kept looking at us so I dug in my pocket and found some dog treats we had brought and tossed one to him. Surprisingly he climbed down the tree and ate it and several more I threw to him. It was surprising because the whole time Riley was barking at him! Anyway, it's been really fun getting out with her and luckily a little skunk spray is the only damage we incurred!

Wishing you all a little less excitement in your days! Thanks for looking!
Posted by Holly Young at 5:33 AM

Your card is just hysterical! I love the way your mind works. Didn't Riley just have some amazing and smelly adventures this week! Dogs are my passion and I love hearing about what other folks pooches get up to.

Thank you so much fo the Christmas card, It's wonderful and I feel honored to be on your list. hugs, eileen

LOL!!! I adore this card Holly!! Love how you've put together the sentiment!! TEEHEE!! Thanks for making me smile today!! Sometimes it helps make the day go better!! :) HUGS

I do think I would have taken off the entire week and not just Monday. Did Brock get sprayed too??


I was reading your post to my husband, he wanted to know what I was laughing about, his comment was, "I hope she's got her rabies
shots up to date".

I gueth I need to comment on your card too LOL, it reminded me of something that happened a couple of weeks ago...My granddaughter and her friend were over and we were helping them with the Ecosystem of the Sahara Desert. The friend has a pretty bad lisp and we had been working on the project since 5:00 that evening, it was then 8:00. They came straight from school and they were as tired as we were. Anyway, the project was completed and my husband was was just going over some last minute review questions with the girls. He asked them to list the things in their Ecosystem...they said, cactus plants, sand, animals and the friend raised her hand and said, Moth. My husband looked at her and said, "MOTH"!!! She looked so sincere at him shaking her head yes and said Uh huh.....(there
were no moth's in the project) she was saying MOSS and instead it came out MOTH.....I burst into laughter at the look on Gary's face..I guess you had to be there to appreciate it but your card reminded me of that LOL

Have a great day Holly, I know you made mine :)

That card is a hoot Holly! I love the text.

Sounds like you have had quite the adventures with Riley lately.

wow..what adventures you have with Riley. :)
This card is just to funny. love it!

OH MS RILEY! :) I think she could give Calamity Jane a run for her money! :) teehee Have you ever thought of writing a children's book??? With Riley as your lead character, it would sure to be a best seller! She surely makes life fun!

I adore this card! LOVE, LOVE, LOVE the image...with Lynne's talent with the pen and yours with your creativity, y'all are blowing my mind this morning! What an awesome team y'all make! This sentiment is PRICELESS! :) teehee Between Riley's escapades and this hilarious card, my day has started on such a happy note! :)

I think I'm making progress on the home front...just wish my batteries were recharged because I'm too dang old to stay up til 3am making Christmas gifts! Just where are those elves???

I don't know how you do it?!!With all that excitement, I wouldn't know what to do !!! Love your card!

Your Riley stories are way too fun, you should ALWAYS have a camera with you! haha
Would have love to see her facing the big pig...and Brock trying to get up the hill away from the skunk! lol
You really should have a Vlog...video blog!

Your card so reminds me of a friend's son. I sent her the link to show her!

Never a dull moment with Riley the wonderdog, huh?

Card is hilarious but Riley is even more!

Sounds like there is never a dull moment at your house! I would have been flipping out, especially with the skunk!!! Love your card!
Pam

Holly your card is adorable! I love the inside too! I love your sense of humor! And omg you should write a book about your adventures with Riley! I love reading your posts about her! Too bad you didn't have your video camera! The skunk and pig episodes would have been winners on America's Funniest Home videos!! Hope you are having a wonderful break Holly!

Sounds like you and Riley have had some real adventures -- I don't envy you the skunking!

Love your image and how you coloured him, adore the inside!! My dog is named Ryley and I would NEVER let him off lease anywhere he'd see something (probably a squirrel) and we would never see him again. AND if we did it would be as roadkill. Honestly he's not very bright! Love your adventures thank you for sharing them.

Hi
What a fantastic card!! LOL, I love the sentiment, just perfect.

Thank you for linking up to Make It Monday this week.