Okay, I'm cheap - or making lemonade out of lemons

I wanted to have another peek of one of the upcoming new images for you today, but I just wasn't able to find time to get something made! The good news is that you won't have much longer to wait until you can see them all yourself because the images will be in the store tomorrow!

I do have a birthday card to show you today. This card features the little Birthday Cake Kaboodle by Diane Carubia. I colored this with Copic markers and chalk and used some yellow stickles on the candle flames. The sentiment was printed on my computer. I had a bit of trouble with this card, but in the end I think it turned out better that it would have. 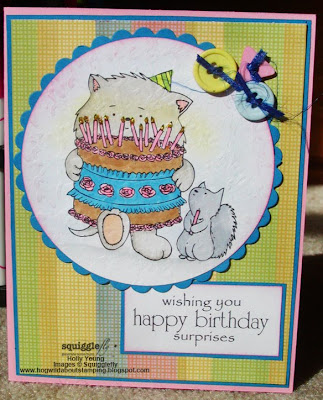 After coloring this I used a circle nestabilities to cut it out. Then I went to emboss it, but the cut circle popped out of the die and shifted during it's roll through the cuttlebug and it ended up leaving this ugly line right through the design! I didn't want to scrap it and start over, so I ran it though the cuttlebug with an embossing folder and then ran it through again in a different direction just to give texture to the whole thing and camouflage the mistake. It worked I think beautifully. I even like the added texture to it! 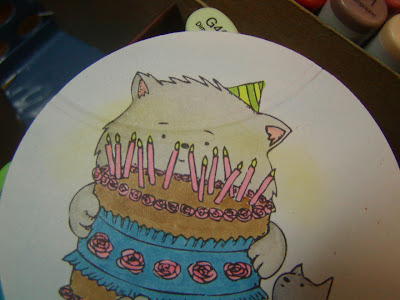 Then after cutting the scalloped circle to go behind the image I realized I didn't have enough of the blue card stock I wanted to frame my designer paper! So, I got cheap and just stuck a small piece of the card stock to the edges so no one's the wiser in the front! 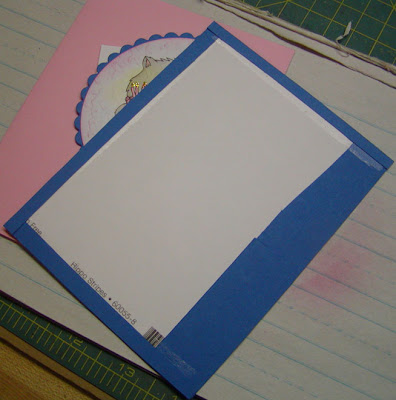 Yesterday after work we took Riley out to the park. She had a blast. She ran into an armadillo and grabbed him by the tail! He was trying to run into a hole and she was pulling him back and I was yelling at her to let him go. Fat chance of her doing that! Eventually he did get enough strength to make it to his hole and she lost her grip on him. Then she dug and dug at that hole trying to go get him. this is a picture I managed to snap of her midway through her digging 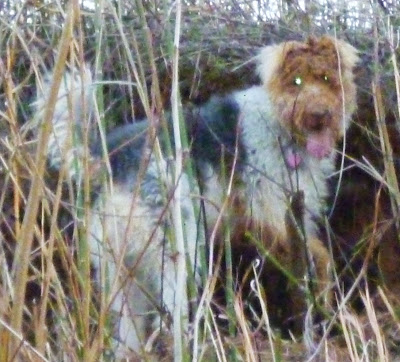 Was she a happy mess or what? The amazing thing is that after she was finished with the hole she ran through some tall grassy areas looking for mice and rabbits and the grass pretty much brushed her clean! Fun times I tell you!

Well, enjoy your day and wish for SNOW to come my way! Thanks for looking!
Posted by Holly Young at 5:36 AM

Love the way you save paper Holly...I probably would have chucked the paper and started over.....I guess that's what scraps are for huh...but I am gathering so many scraps, I'm running out of places to store them :/ I guess I just need to make more cards...oh wait....I NEED TO MAKE cards before I can make MORE cards LOL......I will, I promise I will....


That little playful pup of yours is too cute...I enjoy hearing about her adventures :)

I'm going to enjoy today, tomorrow is supposed to usher in your kind of weather...bring on the snow..I don't have to work in it anymore :)

Have a great weekend :)

Waist not want not I always say. Great use of what you had. I love it.
Looks like Riley had a fun walk. Don't armadillo stink? Do they spray like a skunk? Sounds like Riley has learned how to clean up on his own.LOL so cute I am love reading about his adventures. Sounds like you could make a book. The Life of Riley. Hey that use to be a show.

Riley is a huntress at heart. The expression on her face says it all. What a hoot.

Hope you get snow. We woke up to about 2 inches and only one paw of my puppy-mill breeder, Xena, hit the ground before she was inside. Poor darling, she's terrified.

That puppy sure keeps you busy!! You can have some of my snow!!!!

Well I call it making lemonaide from lemons hun!! Very clever and glad to have you post it for us!! :) It happens...you know?!! I think your card is adorable and your coloring is so soft and pretty!!

Love your card today!!! I'm super impressed with how you saved it. After that first mistake, I would have never thought about embossing it. If I would have had the 2nd mistake happen, I would have given up for sure!!! Thanks for sharing with us again today....I can't wait until tomorrow!!!

Well Holly, you can have some of MY snow! Way too much for one person to have to deal with. Yuck!

Anyway, really liked your card and your ingenious idea for making it work.

Have a good weekend!

1.. having a bad crafting day? sure doesn't LOOK like it from the looks of this absolutely, colorful, adorable card!

3.. your comment on my blog... would NOT have expected anything less.

no wonder i love you.

clever you and your card is adorable!

love when you share Riley stories but don't forget kitty!
have a wonderful wknd!
hugs & blessings

GORGEOUS card...love the glow you made around the candles! Super cool!

Riley is a real character! No wonder she's always getting in trouble! She finds all kinds of varmints, doesn't she?!

Holly I love your card...and how you made lemonade out of lemons...what a cute cute image and I LOVE how you made the nesties look like a balloon! Will be out to see the new releases...thanks for the sneak peeks Holly. Good luck with the snow!
hugs,
Vicki

Good save on that card Holly! I am hoping you got your snow --- it's 12 degrees here and clear as a bell. Going to be a lovely day! Thanks for sharing that pic of Riley -- hoping to see some of her in the snow!

Your card turned out great! I LOVE Riley's adventures, lol. Thanks for sharing them.