Happy Saturday to you all! I'd like to thank those of you who e mailed me yesterday to see if I was okay after Thursday night's storms. We did have some terrible storms pass through here! The only thing we have are a few branches in the yard and some bent flowers, but I saw a lot of trees down in the area!

Have you been to Squigglefly this morning? WOW! What a ton of fabulous new images! There are so many I love that I don't know what I want to color first! With this week's release, Squigglefly now has over 2000 images!

We only need SEVEN MORE people to follow the Squigglefly blog to get those two new Shy Bear Freebies - so spread the word!

Today I have a non card project to share with you. A long time ago there was a fad that ran through the rubber stamping community of stamping on dominoes. The dominoes would be drilled and a cord would be run through it for a necklace, or some hanging decoration. Of course, I had to run out and get a set of dominoes to stamp on too!
The same thing happened with microscope slides! Stampers will stamp on anything!

Well, I still had a few of these dominoes laying around in my stash (I think I've got some of the microscope slides too), and when I saw the Faith, Love, Hope image by Diane Knott I thought it would make a cute wall hanging and the dominoes came to mind.

First I measured where I wanted the holes to be and used a dremel with a small bit to drill them.

The images were then printed on to some tissue paper and colored with Copic markers. After that I brushed some crystal lacquer on to the back side of the domino and laid the tissue on top. I then brushed again with some crystal lacquer. The lacquer did smear the printer ink a bit. Next time I will set the ink a bit better before using the lacquer, but I was going for an old, worn look anyway so it didn't matter much.

I got some tiny eye hooks at the hardware store and screwed them into the holes and used jump rings to attach pieces of chain. 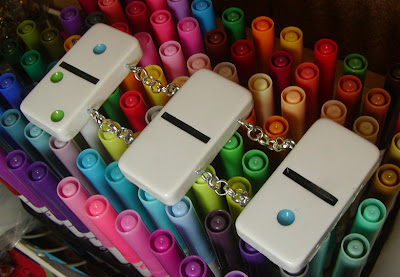 I think one domino with one of the words made into a key chain would make a great little gift for someone! I think I have one more domino in my stash too!
Be sure to check out the new stuff at Squigglefly, and have a beautiful day! Thanks for looking! 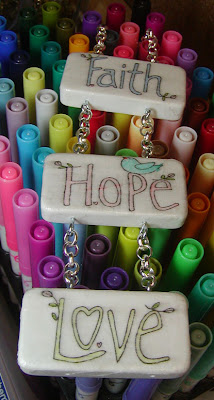 Absolutely adorable, Holly!!! Love how you decorated these! Would be beautiful for a bridal shower gift or house warming gift.

Aw, Holly, they turned out so sweet! Today must be domino day! Terri at Artful Affirmations - link in my sidebar, also has a domino project. I have some in a jar downstairs...you have me thinking I should try something with them.
Thank you for using my art!
Hugs, Diane

adorable!!! love the idea and the words you chose for the design! very creative :D

Such a sweet wall hanging Holly!!
HAPPY EASTER to you and your Squigglefly family! :o)

What a neat idea Holly! You are just the bees knees when It comes to creativity!!! Love it!

WOW! I never thought about doing that. How clever!

Creative, love it, and love all those pretty markers or copic?

Your project is just so cute!!

Glad to hear the wind didn't sweep you away to the land of Oz!

Your little project is adorable! Really...you drilled holes in those things? Is there ANYTHING you can't do? Please don't tell me you know how to work with power tools, too!
(Of course, it wouldn't surprise me if you could build a house!)

Wow you did a fantastic job and the tiles are so tiny! I think they turned out perfect.

Holly
I like your hanging dominos - yes, a great gift idea. I think I would use stazon ink and stamp directly onto the dominos.

Really cut idea... We made necklaces out of some. I like your idea better. Stop by I have something on my blog for you.