Hi everyone! Today is a new release day at Squigglefly! Be sure to take a look at all the wonderful images in the store today. Johanna Westerman Rhodehamel makes her debut there this morning with some great images - a mix of fantasy and a wonderful one for Spring!
Squigglefly is also introducing "After Dark" for your funny fix. "After Dark" will feature sentiments and images that will make you blush a little but laugh a LOT!

Well I ended up having a bit of April Fool's fun yesterday after all. I told every telemarketer that called our office "yes!" no matter what they were selling and then I'd say "April Fools!" Maybe they all got aggravated enough to stop calling!
There's something else I'm doing as a little joke, but so far it's not been noticed. My boss bought a bag of miniature Reeses Peanut Butter cups and keeps them in the fridge. I bought a bag too, but I use mine to refill his bag periodically. I wonder how long this will go on before he thinks this is a magical bag of never ending peanut butter cups! LOL! I am easily amused aren't I?

Well today's card goes along perfectly with the goofy things I just told you, because I'm using the brand new Goof Bug drawn by Nate Owens! 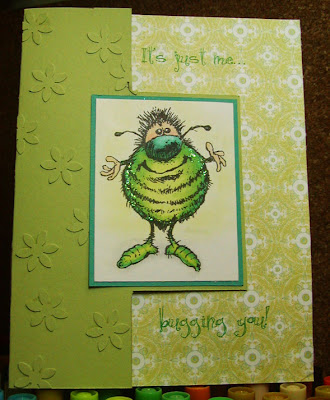 Isn't this the cutest bug? I love his big nose! I colored him with Copic markers and then added just a hint of sparkle with some stickles. I chalked around him with some yellow so it would look like he was glowing. A glowing goof bug! I think Nate should draw him a girl friend goof bug and they could be goofy love bugs.

The flowers on the side of the card are punched from the same color card stock as the card base and then glued on for a faux dry embossed look. The sentiment is computer generated (cricket font free HERE), and is actually on the inside of the card because half of the front of the card is cut away. 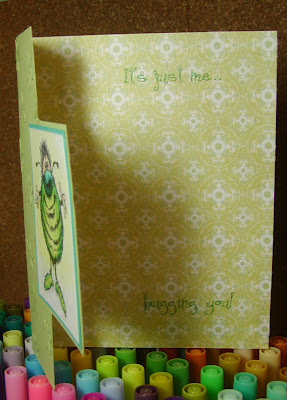 (click to enlarge)
Now don't you just want to run to Squigglefly and buy him up?
I've got lots on my plate today! This morning I'm having breakfast out with my best friend and then I plan on making a stop by Hobby Lobby to see what's new - plus I have a coupon that expires today and I can't let it go to waste!
Then it's grocery shopping, walking Riley, and hopefully I'll get a chance to play with some more of the new Squigglefly images before we go to Chesney's house to play dominoes with my brother and sister-in-law.
I hope you have a fun weekend, and thanks as always for taking time to read my blog!

Hi Holly,
I love this!!! What a fabulous and zany image. Wonderful card design.

Goofy little card! Love how you did the front so that the sentiment is actually on the inside. Love it!

awhhh... I am loving this new little bug too!!

Oh your buggy card is ADORABLE!!! Seriously love it!! Love the way you've colored him, too.

Laughing my arse off over here at saying "yes" to all the telemarketers and then saying "April Fools!" LOL!!!!

So cute and cracks me up!

HE IS SOMETHING ELSE.... Just got home and had to take a look at the new one, love then all. A little bit of everything.
Hugs..

Holly you are a funny gal. I thought you must have been to know Terri (Brat Cards). She is one witty and funny gal...oh just like you. Let me know when your boss figures out the Reeses thing. LOL

Your little bug is just so adorable! Love the Green sparkle you added and thanks for the font link. I faved it. Will try it soon.

Holly, I just posted a little something for you on my blog.

This IS just the goofiest little guy! He makes me smile!
Hugs, Diane

AWWW!! I just LOVE This darn cute image! He looks fabulous in green with a bit of sparkle Holly!! Too cute!! LOL!! Great "goofy" story!! :)

This is just darling!!! I love absolutely everything about it......The shape, the sentiment, the glittery bling, bling! Just a super fun card that would make anyone smile. I guess this one is going on my wish list along with Froople!

Adorable - love the papers and the fold you went with. Great glittery pieces.