Hi everyone! I hope your week is going well. The other day I went to a salon and had my first ever professional manicure. The reason I did it is because my sister in law told me about a new type of manicure she got called a gel or shellac manicure. She said the stuff is painted on your nails and then hardened under a light, and the manicures last a LONG time. She showed me hers after 18 days and it looked like she had just had them done. So, I decided to go and try it myself. I don't mind paying for a manicure if they last that long!

Anyway, so far I'm really pleased. It's definitely helped the strength of my nails! While I was there, the girl who was doing my nails chatted on about different things and she asked me about my hobbies and I told her that I make cards. She went crazy! she said she loves cards, and spends hours at the store looking for the perfect card and she wants to find cards that she knows no one else will bring. Then she told me that she had a couple of baby showers coming up and asked me if I'd make her some baby girl cards. Well, how could I turn her down? I don't get to make baby cards too often, and the fact that they are for baby girls had me sold.

Once I got started, I ended up making three for her to choose from. This first one uses the What's Up Duck image by Paulette Rich Long. 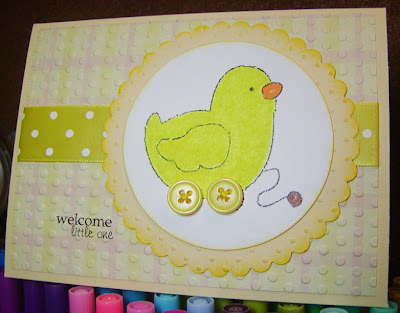 (click to enlarge)
I colored with copic markers and then flocked the whole thing. It's just fuzzy cuteness, isn't it? I added a couple of buttons for the rollers and printed the sentiment on my computer. The background paper is embossed with dots.
I used some of the same paper for the inside of the card and printed out a little poem about baby girls and added a little duck from the set of Baby Items also by Paulette Rich Long. There are about ten different things in that set, and I thought the little duck was perfect. 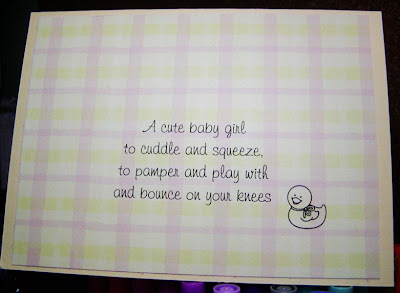 (click to enlarge)
The next card is an easel card and I used the Baby Elephant image from Squigglefly. When I saw the card that Rhonda made HERE with the elephant, I knew that I wanted to paper piece the feet and inside of the ears like she did. 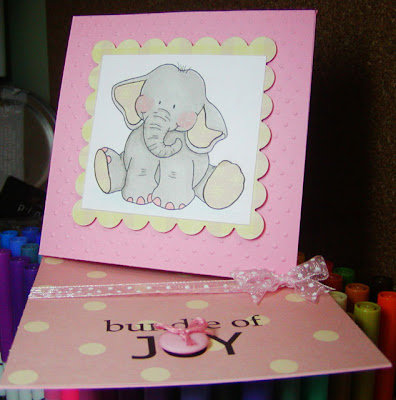 (click to enlarge)
It's hard to see in my photo the pattern on the paper, but it's little flowers. The sentiment was computer generated and I added a big pink button to the "O". Once I had it finished though, I thought it needed a little something else on the front, so I crocheted a few flowers and stuck them in the corner. Little pink rain dots are in the center of the flowers. Doesn't it look better with the flowers? 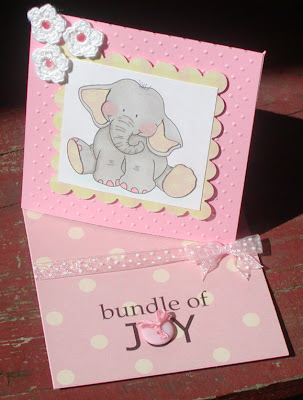 And lastly, I made a onesie shaped card. 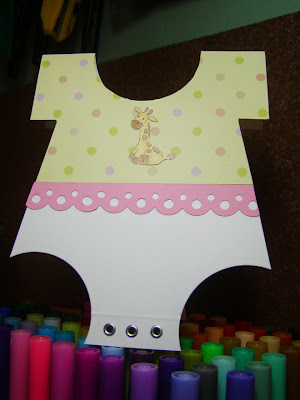 I used some designer paper for the top and added a punched border for an eyelet look. I think I may have made the leg holes a little too big, but it wasn't enough to make me do it over. I used the Happy Giraffe by Eline Pelinkhoff as a little applique on the front. I love that you can get digis so small - they work so perfectly for cards like this! Three silver eyelets at the bottom are the snaps.

These were really fun to do, and I hope she likes them. She's also asked me to make a mother's day card for her, so I'll share that tomorrow. oh - wanna see my nails? 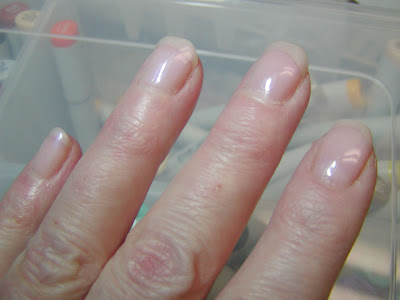 Well, thanks for looking and have a fabulous Thursday!
Posted by Holly Young at 6:12 AM

oh Holly!!! I love them all-she is sure to be pleased as punch with all of them! I LOVE the elephant card with your super flowers added!! Such cuteness!! I really need to learn how to do that kind of card--and I think I saw a tutorial at one time on your blog!!
Love the nails too!!!

Holly these are all wonderful! The elephant is so cute and the dimension really rocks! I I really like the duck too! Heck I love all three of them. And those nails are beautiful...don't it feel good to pamper yourself once in a while?

She's gonna love them all! Super cute! That little elephant is adorable! And being a manicurist, I have to say I love your nails, too!!!

These cards are just so adorable. I am sure that she will love all three of them. And thanks for the reminder. I have to make a baby shower card, my niece is having a baby girl!
Isn't it fun to pamper yourself once in a while and get a manicure? Your nails really look nice.

Fabulous cards - love all your buttons and the swiss dot embossing! Adorable :)

OMG Holly the 'Onsie" is too darn cute. Did you use a pattern for it? I love the softness of all the cards. Great job!

All of the baby cards are so cute. I see you used one of your flowers on the Elephant card looks so nice. The embellishments are so nice. So are your nails. It is nice to have then done.

Gorgeous cards Holly & how exciting to have someone appreciate all the hard work :) Your nails look fab too btw.
Hugs
Tracey
xx

I'd have a tough time choosing one of those three cards! Gotta say I do love the ONESIE card, though! You're a genius.

No manicures for me. I am a bad, bad nail biter. Bad. Bad.

i was wondering if i was gonna see those nails. they look super. love, love, love the cards!

hope you are well, really do miss you, but that's my fault. i'm soooooo all over the place.

Oh wow!! Your nails look amazing and congrats on making such a wonderful contact! All three of your cards are as cute as can be! That onesie is about the cutest baby card I've seen!
Hugs~
Dana

Oh wow girl!! You DID nail you some baby cards here!! :) Love the buttons on the duck and of course that elephant is irresistible! The onsie is sweet too!! Wishing you a fabulous Mother's Day weekend friend!! Thanks for sharing! *Vicki* from Stamped Smiles

These are gorgeous Holly!! I love them all!! The onesie is too cute and the elephant easel is beautifully designed. Have a great Mother's Day weekend!
hugs,
Chris