Finally it's the middle of the week! I don't know why this week seems so long to me, but several times yesterday I would catch myself thinking it was already Wednesday and would be disappointed it was only Tuesday. Maybe it's the time change or something.

Today's card is one I made for the Clean and Simple challenge that Outlawz posted on Sunday. The challenge was it had to be a clean and simple layout of course, and it needed to have a floral theme. I scrolled through my Squigglefly images and chose this Picking Flowers image by Angie Davis. She has so many really sweet bird images! 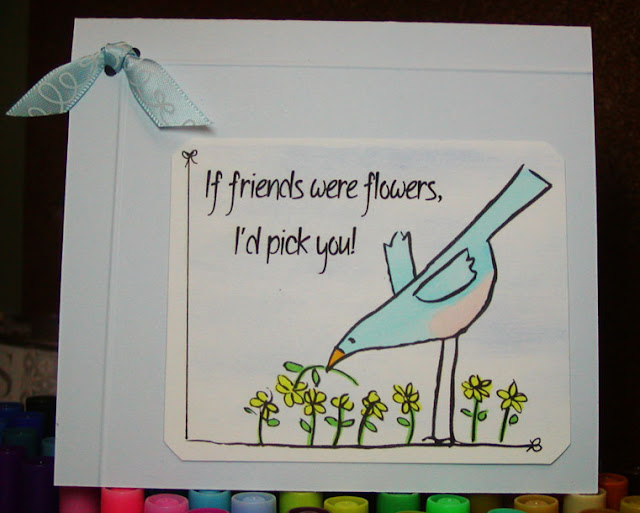 I used Copic markers on the image and chalk on the sky. The sentiment was computer generated and printed at the same time as the image. I did doodle the line along the left edge and little "bows" at the end of the lines. I scored some lines on the card base and then punched a couple of holes at the top to tie my ribbon through.  A really simple card, but I think it's so sweet.

I would pester you to join Squigglefly's blog challenge, but I haven't even done it myself!  Maybe tomorrow...
Posted by Holly Young at 5:38 AM

Holly, Very nice clean and simple card. Good luck on the challenge at the Outlawz. New challenge starts tomorrow at Twisted Thursday at Outlawz and I did a sigglefly image and it will be posted tomorrow.

I agree with you, really sweet card! Love your bow treatment, very crafty of you!

So pretty, love the CAS style.

holly this one is just baby doll cute....really, so sweet:)

This is cute. Love the little bird picking the flower perfect for the sentiment.