It's Tuesday so you know that means it's another one of Mothermark's Teaparties.  This week we are sending cards to a lady who loves hummingbirds, so we bring hummingbirds or flowers that attract them!  Squigglefly has an awesome hummingbird freebie so I went with that!  Coincidentally this also fits in with Outlawz Greeting card challenge which is a fun one.  You have to have something on your card whether it's an image, embellishment, or technique that begins with the first letter of your name.  So hummingbird works for me! 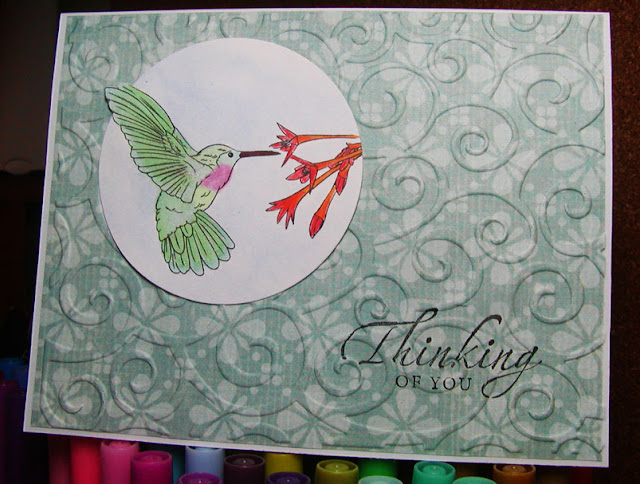 I colored the image with Copic markers and chalked the background with some blue chalk.  After coloring I decided to add a little shimmer to the bird by painting on some iridescent medium.  It doesn't overpower the image, but adds just a bit of glimmer to it.  I die cut the image and let part of the wing fly out.  Here's a close up of the shimmer on the bird 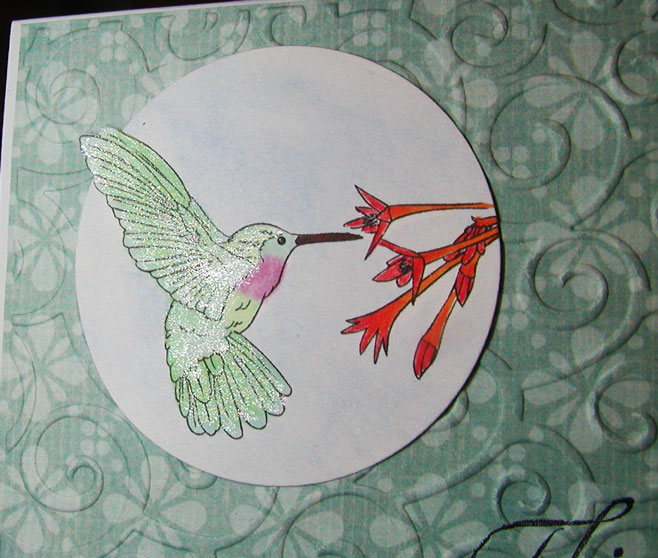 The background is embossed with a swirl embossing folder and I stamped the sentiment with a stamp from a Stampin' Up! set.  It's a simple card, but one I think she will enjoy.

Did you get a chance to see the cards that Holley's Hobbiests did for the new blog challenge?  If you didn't you should make a point to go see them because they are great!  Some really funny cards there!

I know you probably think I'm beating a dead bush by telling you about the One A Day In May sale yet again, but I really don't want you to miss out on this deal!  Plus I heard that everyone who purchases the One A Day In May will be entered to win a special prize.  I don't know what the prize is yet, but I'll let you know as soon as I do!  Even without the special prize, it's something you don't want to miss out on!

Squigglefly will be introducing a new artist this weekend too.  I know you will love her work and I'm SO EXCITED that she has joined us!  Stay tuned folks!
Posted by Holly Young at 5:38 AM

Very very pretty card. Looking forward to the humming birds to come back.
They background is perfect!

Wonderful image! The addition of the shimmer to the bird is perfect and I love the embossing on the DP, one of my favorite techniques. Where's the turtle hid today? :-)

Beautiful Holly. I love all the shinners.
Hugs

Beautiful Holly, this is so pretty your humming bird could take right off. The iridescent wings, fabulous.

Love the background, I don't think to emboss my designer paper. You inspire me!

soooooooooo pretty and glad to see you at Outlawz!

I LOVE the background, soft and swirly it brings out the hummingbird.