Hi everyone. Thanks for the well wishes for Riley. Poor girl is pretty sore, but she's doing lots better than I would be doing if it were me! She's got stitches and a drain in the wound, but it hasn't slowed her down much. She's pretty slow moving and stiff when she's first waking up, but after a bit she's pretty much her old self.Of course, the pain pills probably help with that!   I am thinking her right eye looks a little swollen though.   Here's a picture I snapped of her last night.  You can tell she's not 100% because her tail isn't hooked up.  I just feel extra bad because I know she was thinking she was protecting us from those dogs. 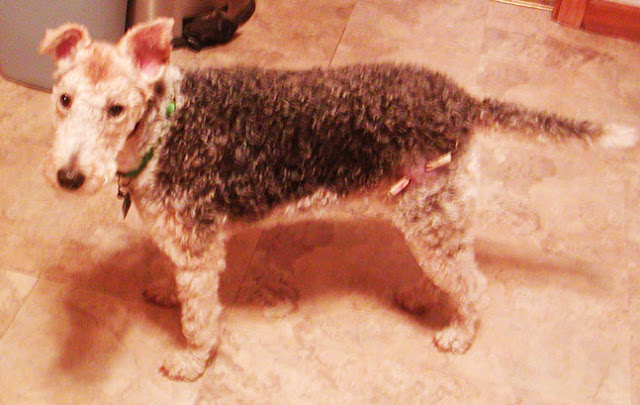 My little PT Cruiser is back in the shop so I'm driving Brock's giant truck to work again. Some kind of malfunction light came on in my car so we took it to a little garage and the guy told us it was a leak of some kind, but the diagnostic code came back as being such a tiny leak that he'd have to have a smoke machine to find it and he doesn't have one. So now we've got the car at the dealership. I hope it's not an expensive repair, and I hope to get the car back soon. This is the first repairs we've had to do to this car though and it's five years old so I really can't complain. Driving Brock's truck makes me nervous though!

Well let's get to the card I have to share today! I used the cute Little Bee by Monica Estill.
I think this little bee looks so sweet and shy. 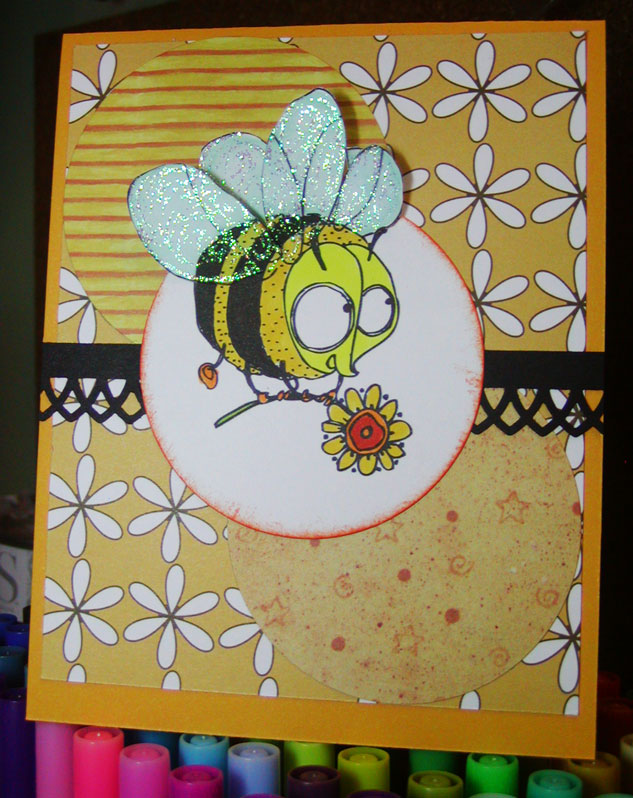 I used copic markers to color and added some glitter to the wings.  Then I cut the wings apart and used some pop dots to separate them so they looked more dimensional.  I am probably going to hand write a sentiment on the lower circle.

Did you see today's One A Day image?  I love it!  I haven't had time to make a card with it yet, but I love the image!  For those of you who didn't order the One a Day images, each image is added to the store as it's released, so go take a look at the Fairy Ring image drawn by Daphne Van der Zanden!


Talk to you all tomorrow - have a great day!

Ahh, poor sweet Riley, she does look like she doesn't feel 100%! Love you card, the bee's wings are exceptional! I'm lov'n One a Day!

Poor Riley..sending her hugs :)
Fabulous card this morning, love how you did those wings.

Adore your card! Kisses and hugs to poor Riley - she's so sweet! Pray for angels to protect you in his truck {I don't like driving my husband's BIG truck, either}. I also have a PT - she's still hanging in there...
Hugz2u,
Sharon

Oh poor Riley! Were those dogs just running free. I wish the dog owner would pay your vet bill. Maybe they would watch them better. Poor Riley! I just went back and read about what happened. I just got back from my trip out east. I went through Kentucky it is really pretty.
Your card is very cute! Love the wings. They are so sparkly.
Sorry to hear about the car and truck. I hope it isn't a big bill. Things come in threes so you are done for a long time. I hope! Hugs Linda

This bee card is absolutely adorable. I love the idea of the wings - thanks for the tip H!

Well, isn't this just the bees knees, oh wait, it is bee wings and I love how you have put the glitter on them.
Very cute. I cringe to look at Riley's drain, but it doesn't seem to be bothering her. Hope she is all healed up soon. I love my truck, you will get used to driving it.

Poor little Riley sure has had a rough life. I hope she's all better soon and can romp and play like she's s'posed to.

My poor Ms. Riley, I feel so bad for her. Her eye does look a bit swollen and that drain looks painful. Glad the pain pills seem to be working for her.
Sorry sorry about the car. I hope its a simple fix. And your card, it is just so adorable I love it!!

I think you should get Riley a black leather jacket and some bling in her collar! Maybe you could have a tattoo shaved into her fur - perhaps around the surgery site. She is one tough dog!

Give her a smooch for Bubba and me.

I like you bee card. The layout idea with the future sentiment in the lower circle is great.

PS: Can you believe my son won't let me shave my name in the back of his hair!?!

I LOVE the expression on that bee, love the way you have done the wings too

Riley sure has had a lot of close calls! Our Ryley cracked a rib chasing a squirrel (he slipped on ice and fell on his side) 2nd week of April. He still isn't 100%. Dogs! I love all the glitter on the bees wings, too cute!