Hi everyone and happy Independence Day! Today I have THREE cards to share with you, so I'm just going to get right to it.

The first two cards are for a couple of men who live in a retirement home in Canada. Their names are Gypsy and Sol. Gypsy and Sol were brought to the attention of the teapotters a while back and some of the teapotters opted to send them cards now and again to brighten their days. They don't have any family or friends who visit them and they share the cards they get with one another to double their pleasure.

This first card is going to Gypsy to celebrate Canada Day.  I used the cute Proud Canadian image that was drawn by Crissy Armstrong for his card. 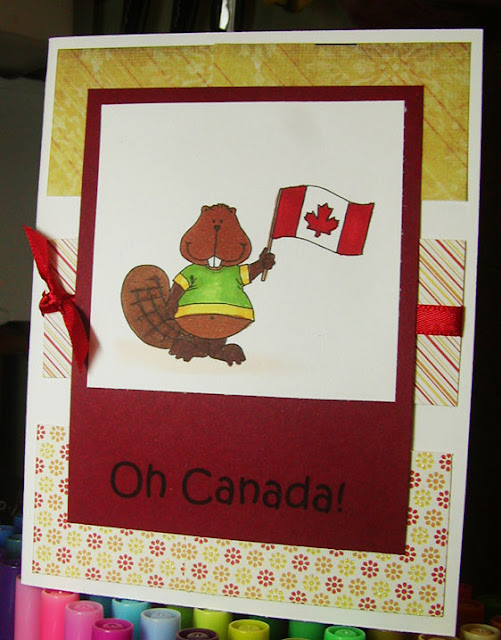 I colored the image with Copic markers and computer generated the sentiment.  I used ribbon, but just tied it in a knot rather than a bow since it's going to a guy.  I hope he likes it!

My card to Sol is a birthday card since he had a birthday yesterday.  My card will not make it all the way Canada in time, so I computer generated a punny birthday sentiment.    As you can see, this is the same Proud Canadian beaver, but he's holding balloons instead of the Canadian flag. 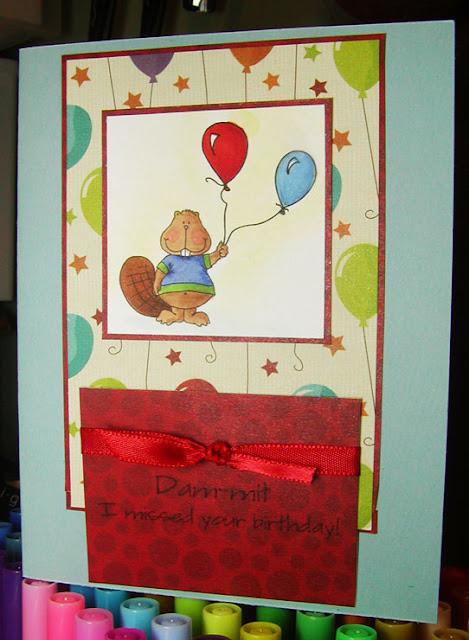 Before printing the image I cropped out the flag in Photoshop and added balloons from Cheryl Alger's cute Birthday Balloon Girl image.  I hope that Sol and Gypsy get a kick out of seeing that both of their cards have the same beaver on them!

My last card is for Mothermark's Teaparty this week.  The theme is baseball and our cards are going to a police officer from Connecticut who was injured recently while on duty.  He is an avid fan of Penn State's baseball team.  I looked up their colors and made my card according to what I found.  The words are computer generated and a quote I found when looking up the baseball team's colors. 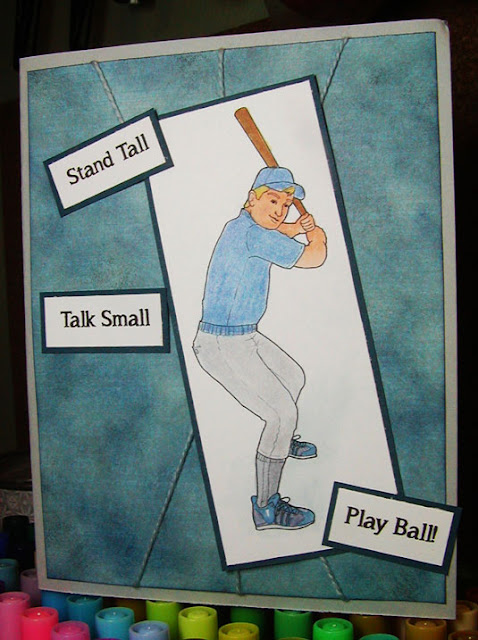 The background was some light blue cardstock that I sponged Brilliant Blue and some black Stazon ink on to. Then I wrapped some gray yarn around it. That's it for me today. I hope you enjoy your holiday, and if you have some free time go make a card for the Squigglefly challenge! You could be the lucky winner of THREE images from Squigglefly!
Posted by Holly Young at 5:38 AM

Wow Holly, all three are such great cards and being sent to others out of thoughtfulness, what a kind person you are! I am such each recipient will be very pleased and touched.

I like all three of your cards. What a funny sentiment on the second one. The baseball card, looks like there is stitching where the twine is. Have a Happy and Safe 4th of July.

Luv all 3 Holly - you are so talented. Just gorgeous and fun!

Great cards for a good reason. Love them all.

are u sure that u don't have wings? holly their are very few people who care about people the way that you do...may we all learn from you my sweet friend!

your cards are beautifully colored and the sentiments are perfect for each recipient; i'm sure each one of them will be thrilled to receive such a sweet card and to know that someone in this great big ol world truly cares:)

may God continue to bless you Big BIG! much love from Dixie:)