A Birthday In Purple!

Hi everyone!  How amazing is it that we had temperatures in the high sixties last night?  I don't think I've ever seen that in JULY in ARKANSAS before!  Sure made for some nice weather this morning when I had the dogs out!  Not cool enough to keep the mosquitoes away however - I have so many bites on me it's ridiculous.  And I hate putting on bug spray, so don't even mention it to me!

I have a birthday card to share today.  This card originally started out as a card I was making for the featured stamper challenge at Splitcoast Stampers, but it got away from me a bit so I never posted it there. 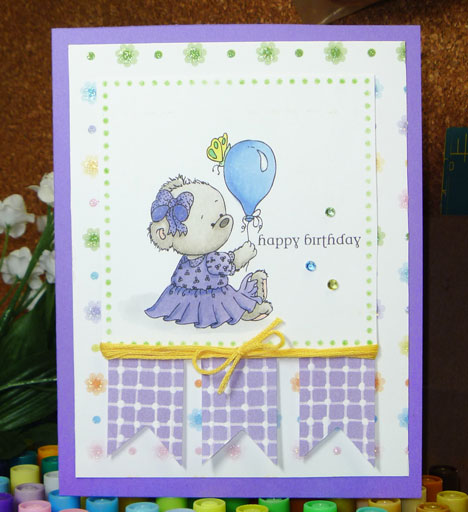 The image is one from Diane Carubia and is available at Squigglefly now.  It's called Hold On Tight Now  I used Copic markers to color the image.  The little dots around the image were made by sponging some ink on a stencil.  I could never get my circles that straight without a stencil!

Now I'll bet you think I'm going to tell you the sentiment was computer generated, but surprise!  it's actually cropped from another digi image from Squigglefly by Robin Willis called Make A Wish Cake.  I used a photo punch from Stampin' Up! to make the little flag banners.  The little different colored gems were just added for interest.  I think the card turned out really cute, and you can't beat that it's got a lot of purple in it!  I love purple!

Enjoy your day - tomorrow's Friday so hang in there!
Posted by Holly Young at 5:45 AM

How cute is that !
Great layout and colors :)

A very cute card. I love this new image.

This is just precious. Love the twine with the little flags.
Hugs
Desíre
{Doing Life – my personal blog}

Wonderful card! Gorgeous colors and I love, love the tags and touch of yellow!

This is gorgeous Holly,I like the adorable image and the design.
Kevin xx

Aaah, how did I miss this image - it's so adorable - as is your card - the image is very sweet!

How cute!! I love the colours you have used, it all fits together perfectly, thankyou for using my image
Hugs Di :)

This is adorable holly! Thanks for sharing how you did the dotted border. Love everything about this - especially the purple!