This Bud's For You

Hi everyone!  Well we're one day closer to Friday!  We have our phone lines back at work, but we still don't have internet service which has made getting some things done very difficult.  It's really amazing how dependent on the internet we've become isn't it?

We have to put Baxter on a diet.  The vet said he has simply gained too much weight, and now we have the daunting task of getting him slimmed down.  I guess we felt sorry for him because he was half starved when he came to us, and he does love his food!  She told me that he could have green beans, and I said "I'm sure he could have ltos of things but I doubt he'll eat them."  He doesn't eat green beans if we just hand him one, but we've been cutting them up in his food thinking the extra food will at least make him feel fuller.  He doesn't seem to notice them in his food.

Today I have a card with an image by Pamela Lehto called For All You Do.   It comes with the sentiment shown as well as the rest of it which is on the inside of my card and says "This buds for you."  I happen to be in need of a thank you card because while I was gone Riley dug up and pulled on the wires leading to our air conditioner and took the AC out!  Brock had to call my boss to come out on a Sunday to do the repair! 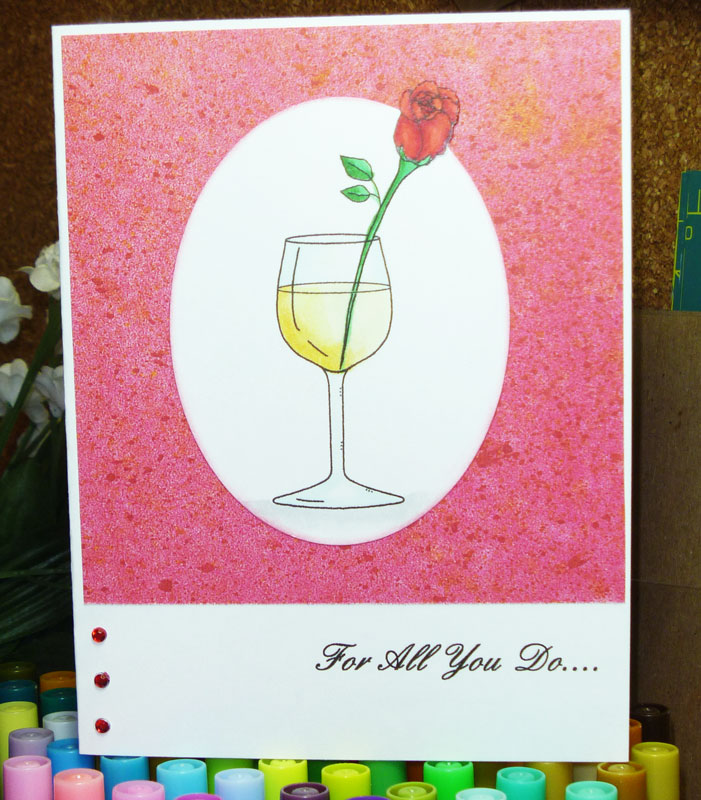 I used Copic markers to color the image, and I thought the designer paper was the perfect compliment to the color of the rose.  Once I had it colored though, I thought it was weird that I used a white wine color for the liquid in the glass - I mean if you had a rose bud in a glass you'd probably use water - not a white wine!  Oh well, what's done is done and the color of the liquid goes well with the paper too!

Enjoy your day - and if you have time to play in a challenge today why not play in Squigglefly's challenge?!  There's still plenty of time - and so far no winner!
Posted by Holly Young at 5:45 AM

I personally would have no objection whatsoever to a rose served in my beer! Pretty card and fabulous shading! My girls all like lettuce and broccoli, as well as green beans. Avoid carrots since they are high in sugar and defeat the purpose, I learned that the hard way with my first golden.

i'll bet it's easier for the dog to lose weight than people! LOL.

sure hope it's nice and cool by you. it's sweltering here. even I don't like it.

Maybe the flower would last longer if put in wine....gorgeous card!!

Love how you did this digi and the wine color is a good touch. Love the background paper too.