Hi everyone!  Sorry I missed posting yesterday.  I just plain old forgot about it!  Every day this week at work my boss's 7 year old has come over to spend the day with me.  We have played school and house until I'm blue in the face!  Yesterday she asked me if I wanted to play school and I said "no, we've played that the last two days."  So he said, "You wanna play house?"  and I again said no, for the same reason.  So she pulled out all of the games.  We played Trouble, Chutes and Ladders, Go Fish, Candyland, Hi Ho CherryO, and then we played Chutes and Ladders again backwards where we climb up the slides and slide down the ladders.  We painted nails and then I found her some cartoons on Netflix on my computer and had her watch some My Little Pony episodes while I caught up on work.  Then it was only lunchtime!

I tried to get her to go outside and play, I said "You remember when you wanted your dad to put up that swing?"  and she said yes.  "And you were so excited when he finally did?"  she said yes.  I said, "Well I don't think I've seen you swing it on but one time since then."  She said she had about 30 times.  Then I said "What about that trampoline?  I think I've only seen you on that once and even then you weren't jumping on it."  She said "Miss Holly, I do that on the weekends when you aren't here.  When you're here I want to be with you!"  Needless to say that after that we played school!  She sure knows how to guilt me into getting what she wants!

Anyway, I told you all of that because the image on my card today reminds me of her.  It's a new one from Cheryl Alger.  In fact, it's so new that it won't be in the store until Saturday.  The name of it is
Just A Little Hello Maddie. 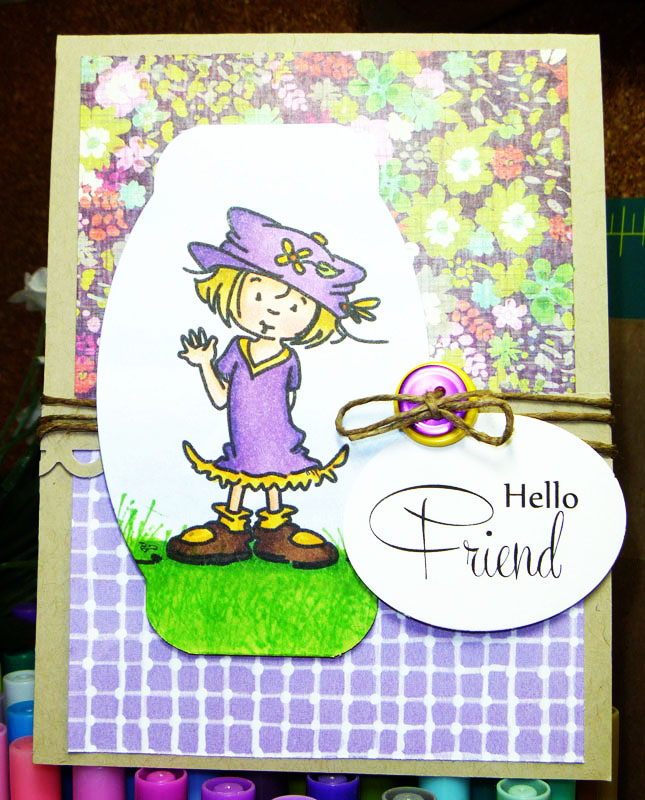 I used Copic markers to color the image with, and I chalked the sky.  The sentiment was computer generated.

There is still time to play in Squigglefly's blog challenge and I know that so far is there is no winner - so get to it!
Posted by Holly Young at 5:45 AM

That little girl knows how to trip your trigger Holly! How precious; wish my work days would've been that enjoyable! BTW I too was coloring Maddie last nite and I was using blonde hair and violets! :)

Yup, I'd say she has your number and then some! Your card is so adorable, love all the purple!

oh mY goodness!! They can wear you out real fast, huh?!! She sounds like a doll! School will be back in session soon.... Love your card!

Fun card, sounds like your little friend is very ambitious.

Have missed you the last couple of weeks, hope everything is OK.

Just wanted to say Hi! Holly and I'm thinking of you. Hope everything is okay.

Precious image! Sounds like you had a fun week playing! Your card is super cute!!!! Hugz!