Hi everyone!  Happy Friday!  We had the best afternoon at the park yesterday!  The dogs were really pumped up, and couldn't hardly contain their excitement when they saw us getting ready to go.  The day was beautiful and perfect. Riley was so excited and tested her limits with us getting out of bounds a few times.  Baxter was the perfect gentleman though and stayed right by us.  He would get ahead of us on the path and then turn around and check to make sure we were still there.  He was hunting though too!  He found the first squirrel hole (or whatever animal made that hole his home!) that had Riley scratching like mad.

One thing that was funny was a few times Riley got a little too far out and out of bounds and we would call for her.  After the first few times when Riley came back by us, Baxter started "herding" her in, and would grab fur on her back with his mouth to keep her on the path.

Okay, today's card is made for a dear friend and also for the Squigglefly challenge which is to use polka dots.    P.S.  So far there is no winner for this challenge, so if you play you have a good chance to win! 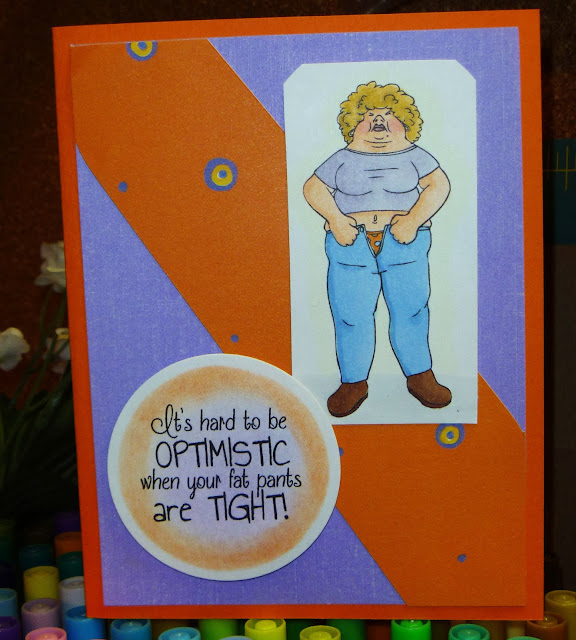 I have a few polka dots in the designer paper, but if you look closely you will also see polka dots on her panties!  LOL!  This image is from Squigglefly and was drawn by my youngest daughter Chesney Young.  The image is called Up A Few Pounds.  Now the sentiment is one from me, but I came up with some many different sentiments that would be fun for this image that I made up a set of five different ones.  It will be available at Squigglefly during their December release.    However, I asked on my facebook page for people to finish the sentence "Trying to get into skinny jeans is like ..."  I promised a prize to the winner.  The winner turned out to be Stephanie Barber who came up with "giving birth in the opposite direction."  There were other entries I liked, but Stephanie's had me laughing out loud!  So Stephanie won a card from me with this image and her sentiment!  I will post a picture of the card when I finish it, but since that particular sentiment isn't in the set of sentiments I made for Squigglefly I am offering it to you free if you happen to find it as funny as I do!

As for my card, I used Copic markers to color it, but I chalked the sentiment.    I hope you like the sentiment, and I also hope you will check out the other sentiments when they are released in December.  I have also used this image with the sentiment "the stuffing that comes AFTER Thanksgiving!"  LOL!  Isn't that just so true?
Enjoy your weekend!  I'll see you all on Monday!

congrats to steph. she was hilarious... and so is this. THANKS holly!!!

oh Holly!! This is hilarious...this is so true!! Specially this time of the year with Thanksgiving and Christmas both right around the corner! so glad the dogs had fun and the weather was perfect for "doggy day out"!

So funny unless you are the one that is trying to get those skinny jeans on. :) Great sentiment, thanks for sharing it.

OMG Holly...we need a stamp that says that. I was funny lol. I thought it was cute but reading this blog post REALLY made me smile! Loving it!

Hysterical, Oh! I love it when I visit, I usually laugh my socks off, this is no exception brill sentiment from Stephanie, but also the image is hilarious too.

Too too funny! The sentiment is hilarious and perfect for the fun image! Love her polka dotted undies!

Holly,
So very adorable and made me laugh out loud.