but there are bound to be times when you have to.  Unfortunately, a friend of mine lost her mother recently.  She and her mother were very close and so I found myself having to make a sympathy card.    The first image that came to my mind was the image at Squigglefly by Lynne Stansbery called
The Power Of Prayer.  This image speaks volumes by itself, but the sentiment does come with the image. 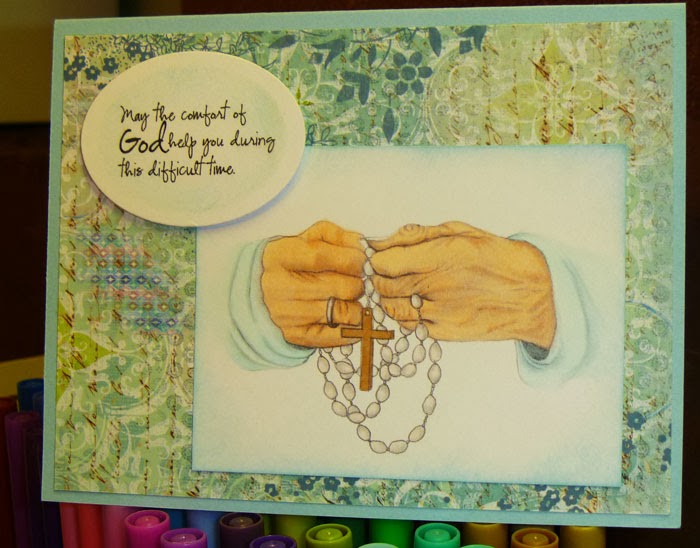 Yesterday we had a lot of cold rain, but even though we were under a "winter weather advisory" we never got any sleet or snow.  It wasn't for the lack of me crossing my fingers!  LOL!

I wish you a fantastic Tuesday!
Posted by Holly Young at 5:50 AM

o.m.g. this is beautiful! absolutely beautiful! i must get that image!

A beautiful card and I am sure your friend will appreciate it. I also love this image, but I love all of Lynne's images.

A beautiful card. Your friend will be comforted by it I am sure.

This is beautiful and your colouring awesome.

That is an amazing image. Beautifully colored. Happy Thanksgiving, Holly!

Beautiful card Holly, I'm sure it will be treasured by your friend! Have a very Happy Thanksgiving!

this is gorgeous Holly-your coloring is so spot on!! Those hands looks so real!! Great card-perfect for sympathy!!

Been browsing for some nice sympathy card messages or just any words to uplift and comfort people who are downhearted. I felt happy to have found this inspirational page of yours. These words are very nice. Thanks and keep sharing :)