Yay for the weekend!  All week long I've been a day behind so Friday should have been yesterday!  Seriously - part of my job is lining up calls for the guys to go on and Wednesday I handed a sheet of calls to one of them.  Then a man calls to see if we were still going to come to his house even though it was raining, and I looked at the calendar since I didn't have him on our call sheet and BAM!  I realized I was a day off!  So embarrassing, but so glad he called!

Today's card is one I made for the Friday Copic marker challenge at the Outlawz from last
Friday.  The theme of the challenge was pumpkins and I used a wonderful pumpkin image from Squigglefly called Pam's Pumpkins.  It's drawn by Pamela Lehto . 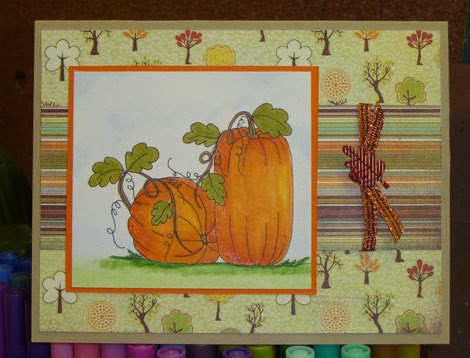 I love coloring pumpkins.  I don't know why, but I find it very enjoyable.  Maybe it's because it's one color with just different shades.  I don't know, but I had fun coloring this.  I chalked the sky.  The rest of the card was just a matter of picking papers and embellishments.  Easy peasy!

One last thing before I let you go.  Yesterday after work I went to get my hair cut.  It was way over due!  So I come home and Baxter comes running out to greet me like he always does.  We love on each other and then come inside where I proceed to play with both him and Riley.  Then I fix them both dinner. Baxter is eating his dinner, I had walked down the hall to close the blinds in our bedroom.  I walk out of the bedroom and down the hall and he just starts barking at me like I'm a total stranger!  Later he did the same thing when I walked out of the bathroom.  Brock said "maybe it's your hair cut" but I think that's nuts since we had met at the door and played together.  I don't know, but he was not happy with me last night!

A very pretty card, I love the pumpkins on the fall tree dp. Great coloring.

lovin' your card Holly! Going to case it too!

Baxter is just silly! Love your gorgeous card and beautiful coloring! The background is so pretty and I love the ribbon treatment.

Might be an easy peasy card, but it's a lovely one! Aren't dogs funny? Gotta love a crazy fur baby!

Holly, this is so well done- great image, coloring and papers. I have to watch myself - I could very easily be a day off! Have fun on your day off! Hugz!