Hi everyone!  I hope you had a great weekend.  Mine was okay.  I spent a lot of time cleaning the house which was good, but it means I didn't get as much card making done as I would have liked.  I have to admit though, that having the house clean feels really good!

The card I'm sharing today is one I originally made for  a challenge which was based on a photograph where you were supposed to make a card based on the colors you saw in the photograph.  I saw red, black, and green. 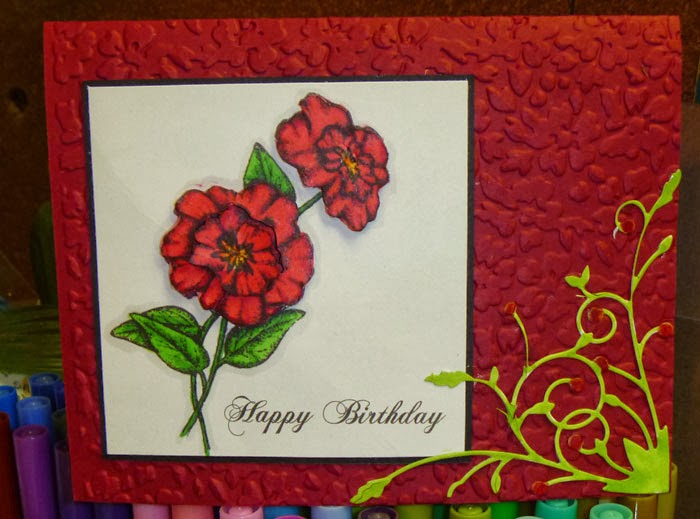 The image that I used is from Squigglefly and is by Lynne Stansbery.  It's from a set of all different kinds of flowers called Flowers Set.  I printed the flower twice and cut out the middle part to pop it up for dimension.  Once I had the layers of the flower down, I used a light gray Copic marker to make a shadow around the image.  The sentiment was computer generated at the same time I printed one of the flowers.

The corner is a die I just bought that I colored with Copic markers.  The back ground which is the card base is embossed with an embossing folders.

I want to remind you all that today is a new challenge on the Squigglefly blog!    I hope you find some time to play along.  I'm going to try my best to play!
Posted by Holly Young at 5:50 AM

this is gorgeous, love how you popped up the middle part of the flower! off to check out the new challenge!

Wow, beautiful card and such rich colors! Glad you had a productive weekend even if it was cleaning!

OH Holly, this is gorgeous. Love the red embossing and love these flowers.

Wow - these flowers are so pretty - the embossed bg really brings out the color too. I want that corner die - it is so pretty! Well done Holly! Hugz!

A very beautiful card. I love the madeira corner.