Hi everyone, and happy Friday!  I've got what I found to be a hilarious story to share with you, but first let's get to today's card. 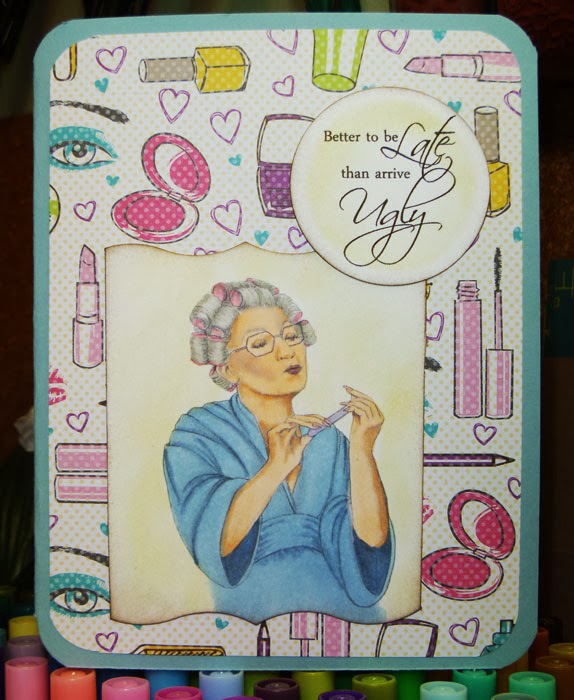 This was a fun card to make!  The image is by Lynne Stansbery for Squigglefly and is called Vanity, Thy Name Is Woman.  I colored the image with Copic markers and then cut the top and bottom with a border die.  The edges were sponged with some chocolate chip ink.  The sentiment is one I did on the computer.  I thought this background paper with lipsticks, powder compacts, nail polish, and perfume bottles was perfect!

Now for my story.  My daughter recently got a new puppy named Moby.  Here is a picture of him - isn't he just adorable?  He's a french bulldog.

Well, Moby had an accident as puppies will do and pooped a little in the corner of a room.  My daughter wasn't aware of it until a little later.  It seems her Neato - one of those automatic vacuums - came on to do it's usual run of the room and proceeded to the corner where little Moby had left his deposit.  The Neato picked some of it up which resulted in gunking up it's parts, and then rolled through it, backed up and tracked it over the rest of room which brought it back through the mess again to track it in more areas.  She said what would have been nothing to pick up and clean had she discovered it turned into a real mess.  Plus she had to take apart her Neato and clean it!  I laughed so hard when she was telling me the story, but I know it wasn't funny to her at the time.

Enjoy your weekend people!  I'll see you on Monday!
Posted by Holly Young at 5:50 AM

Your card is great. The paper and sentiment is perfect. Great coloring, too.

Moby is just adorable. I love Frenchie's. I keep thinking about getting one and then I talk myself out of it. Glad that Neato was able to be taken apart and fixed.

I love your card and it is so perfect! Moby is so cute and I know the story is funny but probably not to your daughter, especially at the time! I have two new puppies and I sympathize with her (even tho I don't have the Neato to help spread the joy).

Wonderful coloring on a fun card! Everything works so well together.

I'll share your Neato story with my son. He thinks we need a robotic vacuum. This story may change his mind!

Love Lynne's image, and am using it in the very hear future as well!
As for your story, it doesn't pay to let anyone but a woman clean the house. Amen!

I love the card - have done that image and it was so much fun! You thought of pink brush rollers too just as I did! Funny story about the new little Frenchie! He's a doll. Life will get better.

Love your card, but the story is hilarious, a lesson learned I guess ROFL

I adore this card! Eek! As for Moby,(so cute)..... I have a stamp that sits on my desk. It says "Some Days Are Just The Poops!" That about sums it up.

What a fabulous card, colored beautifully. And yes that design paper is perfect with this image.
What a funny story and what an adorable pup.

Oh my goodness, what a story, Holly!! I cant even imagine her horror of realizing what happened!! What a cote little fella though, i am sure he has already been forgiven! Love your card, your sentiments are always the best!

Awesome, Holly! What are the fonts you used for the sentiment?

What an adorable little pup!!! Automation isn't always the perfect solution is it? LOL....your poor daughter --- but it IS funny. And your card Holly, I simply love it. Coloring is perfect and yes, that background paper is perfect!!!